Over the last decade I have acquired over 100 YoYos. I have way more than will actually fit on my display shelves. Here are a few of them: 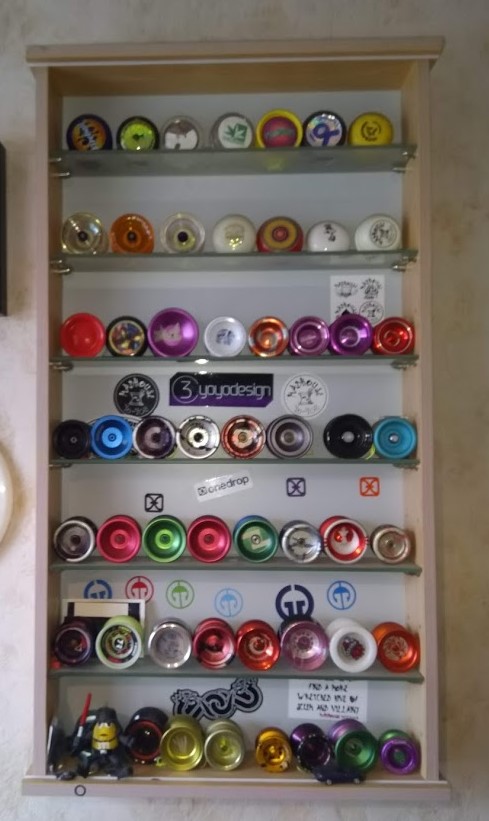 This is the Magic YoYo T9 that got me interested in modern yoyoing. The purple bits are called Hubstacks and allow you to perform extra tricks by grabbing them in mid air.

This was bought with red anodising originally but I stripped, sanded and polished it when I was running DONY. It also has a conterweight attached for 5A play.

One Drop wanted the yoyo community to design a yoyo which they would then make. The result was the CODE 1. This is the Lilly Pond colourway. It has black aluminium Side Effects.

One Drop posed the yoyo community to design another yoyo which they would then make. The result was the CODE 2. This is the Deep Space colourway. It has brass dome Side Effects.

This yoyo is wider than usual yoyos (width = diameter). It also has a smaller "A" size bearing to allow a faster spin. The edges on the Steamroller are pretty sharp and can cause serious injury. Haha.

One Drop and CLYW collaborated on a yoyo. The Summit is an awesome yoyo. This is in the old YoYoZ Colourway and it has brass dome Side Effects.

The Nessie is one of my favourite yoyos. Made by GSquared it features a tiny spike which allows for some fun finger spins. Also in the old YoYoZ colourway.

The DV888 is a nice organic wedge shaped yoyo. This was originally blue anodising but I stripped, sanded and polished it before Nickel plating it for DONY.